InfoCrank is technically dense, yet incredibly simple to use

What allows us to assert so plainly that InfoCrank is the most accurate power meter available today? Read on to find out why.

The design and manufacture of your InfoCrank is the culmination of years of behind the scenes research and testing.  We control the whole process to ensure our accuracy claims are, well, accurate.  We then submit our InfoCranks to external verification.

1 : Tangential load (power generating) – This force generates power as the crank rotates.  A power meter should accurately measure this force, or its equivalent torque about the bottom bracket bearings.

2 : Axial load – Produces tension or compression in the crank arm. It is highest when the rider’s weight acts downward on the pedal when the pedal is at its lowest point.

3 : Side load  –  This load can be present when the rider leans the bike during hard acceleration.

4 : Pedal axis torque – It is not possible to apply this load to the crank through the pedal unless the pedal bearings are faulty.

5 : Crank axis torque –  This load is always present since the pedal ce ntreline is necessarily offset from the crank.

6 : Side torque –  This torque bends the crank towards or away from the frame. This load is highest when the rider’s weight acts downward on the pedal when the pedal is at its lowest point. 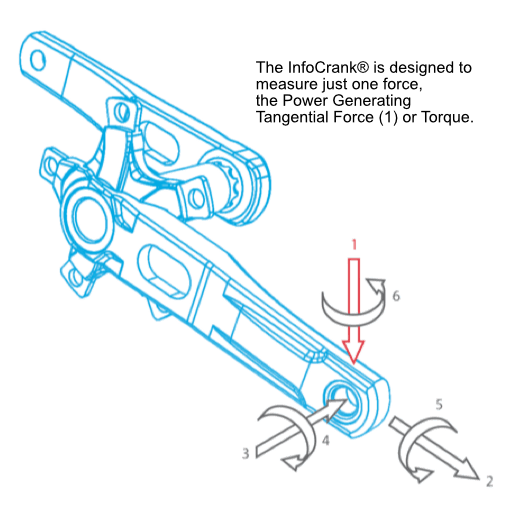 Verve manufactures InfoCrank to the high standard required of a precision instrument.

By controlling all manufacturing processes, we set a standard of accuracy that’s not possible by adding a power meter to an existing crankset. The crank is a top-quality, conventional 2D cold forging.

The strain gauges are bonded into symmetrical pockets in the inner and outer faces of the crank. Variations between left and right cranks in a pair, or from pair to pair, are vanishingly small, amounting in no case to greater than a 1-watt difference as manufactured—eliminated in any case by factory calibration.

Our focus in manufacturing the InfoCrank is on the accurate assembly of mechanical and electronic components into a precision load cell capable of reliable and stable performance even in a hostile operating environment.

Why do we say InfoCrank, an alloy crankset, is a precision instrument? Because each crank, right and left, is designed expressly around a strain-gauge load cell.

A load cell is a transducer that converts a force into an electrical current and is used for measuring instruments such as lab and industrial scales.

A single InfoCrank arm is so very accurate because the strain gauge measures only tangential force, or torque—the force the rider puts in that drives the bicycle forwards. The load cell design means that side, radial, and twisting loads that are exerted on the crank (but do not move the bike forward) are not measured.

Every load cell is individually calibrated and independently tested and externally certified. The certification tests proved an installed, operational InfoCrank had an average error of <0.2% in the zone where we ride most. The greatest error in 100 tests was 0.57%.

No other power meter has achieved such high levels of accuracy.

A strain-based load cell’s accuracy is degraded by external temperature changes, a problem for cyclists who, as all-weather athletes, expect to be able to use their equipment in all conditions.

Temperature changes cause thermal expansion that can be confused with a load change and result in incorrect power readings, so power meters that use strain gauges must compensate for these errors.

InfoCrank overcomes these false readings by using the highest-quality strain gauges that are compensated for the thermal expansion of the aluminium crank. Additionally, the use of four strain gauges in each crankset in a full Wheatstone Bridge configuration inherently compensates for temperature and makes the InfoCrank insensitive to temperature changes. The quality, match, and placement of the strain gauges with the alloy and the full Wheatstone Bridge configuration is the most accurate solution to temperature-corrupted readings.

An accurate power meter is only one half of the equation, the ability to transmit and process the data is equally important.  Again InfoCrank leads the way.

It is not possible to achieve 0.5% accuracy in a power meter with fewer than 50 samples per rotation. InfoCrank’s 256 samples per second rate far exceed this requirement even at high cadence.

InfoCrank measures torque at 256 samples per second, so at 60 rpm, it samples 256 times per rotation, at 120 rpm, 128 times, and so on. With a low sampling rate, important torque information is not recorded, especially during the torque peak of the rider’s power stroke.

This has been put to the test: torque data of a track rider’s session was collected at 480 samples/sec, using local storage on the bike. After download, it was plotted using a discrete Fourier transform.

The data was then plotted again using the simplified algorithm implemented within InfoCrank’s firmware—the waveform is identical to the Fourier plot.

A sampling rate greater than 256/sec does not increase precision, requires more compute power (so more battery power), and requires more bandwidth than is currently available to transmit reliably to the head unit with no data

Both left and right InfoCranks include an ANT wireless module.

Communications to the bike computer are via the left crank, but both cranks are in continuous communication, creating a true bilateral power meter. If the bike computer supports bilateral features, left/right balance, torque effectiveness and pedal smoothness can be displayed, as well as total power and cadence.

The ANT+ Protocol sends and receives messages at a rate of 4 times per second.

Verve uses ANT+ to transmit InfoCrank’s data because of its compatibility with bike computers and sporting software. It has a very low power consumption rate, which add to InfoCrank’s 500+ hour battery life.

In response to customer feedback InfoCrank no longer requires cadence magnets to accurately calculate cadence. However, this option is still available on request. With our new magnet free firmware, cadence is calculated using data collected from our high sampling rate (and some clever maths) meaning you now have accurate cadence measurement without the hassle of mounting magnets to your bike frame.

InfoCrank’s compact module set is powered by four silver oxide batteries, providing seamless riding for up to 250 hours when using recommend Renata batteries. The recommended Renata SR44 batteries can be purchase directly from our website or various online stores.

At InfoCrank accuracy and reliability is our focus.