Some Observations from the Haute Route 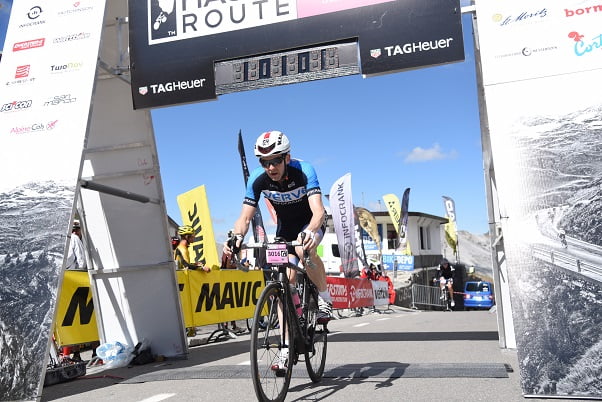 The summer of Endurance Racing is over and our team have spent some great times with the Haute Route in their last three events – two to go!

Most importantly, we conducted the InfoCrank® Pacing Competition at all the European events this year and also assisted any rider who asked in their pacing questions, regardless of whether they had a power meter or not. This was the first year that we helped riders who rode other power meters. This meant that we collected lots of useful data and had daily feedback with many riders – as many as we could physically cope with.

Firstly, some information gleaned from our competition participants – a great cross section of those who do such gruelling events.

In the two seven day events held so far, we have had over 80 riders competing for the InfoCrank® prizes and we received daily data from many of them for analysis.

What sort of things did we notice?

“The first stage of each Haute Route determines the winner of the pacing competition. The people who resist the urge to race hard on their fresh legs ride much better as the week progresses. Meanwhile their opponents weaken. This rider buried himself at the start of the race and again on the first climb. You can see the effect of efforts above his Critical Power (CP) by the deep descents on the red graph (called W Prime Balance) and the slower recoveries from the depths.”

The rider below rode steadily, even though he felt the pressure from the group just like the top rider. He conserved his above CP efforts very carefully – shown by the good recovery in W1 Balance.

Both riders are arguably of similar ability and rode much of the race together. They are both top 20 riders. Our pacing winner (the bottom graph) improved his overall position to 8th place by the final stage. The first rider improved after the third day, once he realised his mistake and recovered from his first day effort. Making up the deficit was too much though and he finished in 15th place.

“It is possible (just like the theories say) to improve your CP60 during a multi-day event. Our Pyrenees winner did just that. The screenshot below shows the first 6 days of the race – starting on August 13th.”

Notice that his Heart Rate stayed quite constant from day one to day 6. Only on day four did he not put in huge effort. Day 5 was a time trial day, so it required maximal effort, which he delivered, but still managed to achieve a CP60 19watts better that day than the first. His pacing was designed to fit his TT characteristics of steadiness, but the unexpected benefit was that he was getting stronger as the race progressed.

“Some power devices really do make a mess of the rotation by rotation recording. It is amazing that riders think that looking at the number on the screen can be of any benefit at all.”

This is a slightly smoothed power graph for 20 minutes from a spider based power meter. Generally, quite good data –whether true or not, we cannot tell – but about a dozen dropouts in 20 minutes. This makes a difference to the final numbers and needs to be fixed in the analysis programme for a true understanding of the riders CP for the climb

Compare with this file from an InfoCrank®, same climb – where to make measurement more difficult, the rider was off the seat 10 times during this screenshot, with huge variations in cadence.   You can see the power lifts during his time off the saddle.   There is no fixing required for this data.

What we can’t show you are the spikes in the data of some of our riders on other devices because we manually eradicated them all before any analysis.  The record was 60,000 watts if anyone is interested.   Won’t tell you which device it was from 🙂

“We were often asked for advice by riders who used some of the “estimator” type of power meters.

Even after analysing  their data, we had to beg off giving very specific advice.   Everyone looking at the data with objective eyes could see that none of the numbers could be trusted – you actually don’t know which ones are right and which ones are wrong.  (One study that we did, showed in a 42 minute climb a pedal based power meter showed the same number as the InfoCrank® only 6% of the time and varied second by second by +-37%.) However, there are always amazing cases to take your breath away.  One rider had a pedal based power meter that showed that she had an imbalance of 28%/72% left/right.  She thought that maybe it was plausible as she had a knee operation some years ago, but looking at her efforts and her bike riding ability, this did not ring true. We tested her with the Verve Micro Series (available soon on the VINC app) and it showed that her imbalance was closer to 49/51.   I assume someone will be buying those pedals second hand soon.   When you can’t trust the output, you cannot change your actions.  You also can not give anything other than general advice – because you are making up all the rest. Till then, we trust that you are building up a valid data file that you can base your improvement on in 2018.

Why we recommend Training Camps for Endurance Cyclists →