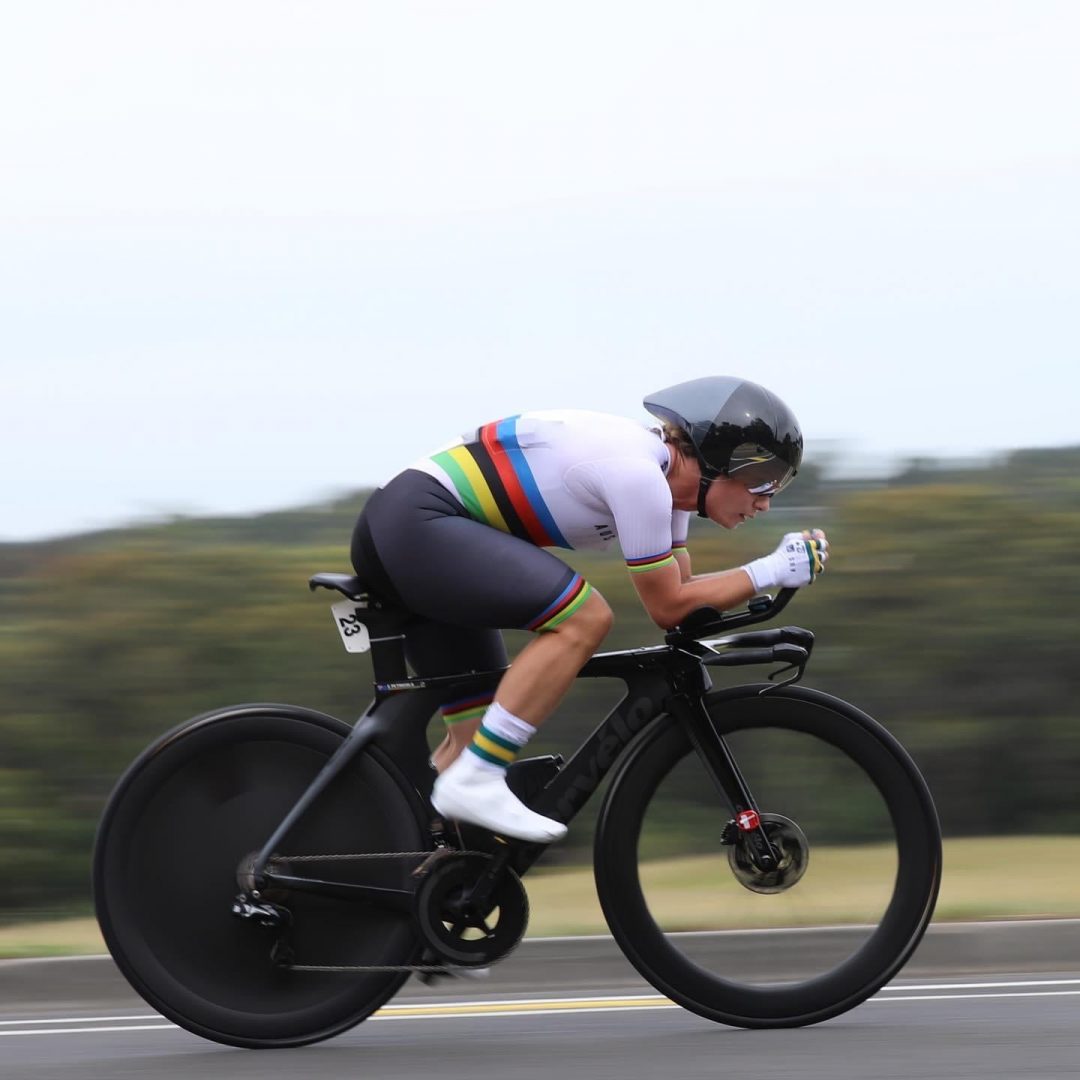 Emily Petricola may be a five-time world champion cyclist, but she’s still relatively new to the sport.

She made her first major appearance on the world stage at the 2018 UCI Para-cycling Track World Championships in Rio de Janeiro – eleven years after being diagnosed with multiple sclerosis.

She won two medals in Brazil and set a new world record in the C4 individual pursuit before winning the first of five rainbow jerseys on the track and the road the following year.

Now, as she prepares for her first Paralympic Games in Tokyo later this year, Emily tells us about how the InfoCrank has supported her in her cycling career.

As a young person I had rowed at school and for a year or two thereafter. Even after I retired from that sport, I continued to train the same as I had as a rower – which for anyone unfamiliar with rowing, is pretty intense in terms of training commitment!

So, when I was diagnosed with MS, I went from being someone who was really fit, active and healthy to someone who was not capable of doing exercise to any level, let alone the way I had prior to my diagnosis. As a result, I put on a huge amount of weight and was also pretty depressed. I had tried many times to restart exercise, but one of the tricky things with MS is that as your body temperature increases, it can trigger your symptoms.

My life has completely changed post-diagnosis. I’ve changed careers, sports and even the place where I thought I was going to build my life a few times over. All of the expectations you have as a young person about what track you are on, and where you are going next get thrown out the window when you are diagnosed with a degenerative condition like MS, which has no set course and no way of knowing when something might go wrong or change. It was a true loss of identity as I was no longer capable of a lot of things I had done before.

My energy levels were completely compromised, my body was functioning in a different way and I looked completely different to what I had my entire life. The first few years I was struck down with a number of relapses impacting so many different areas of my body, I spent a lot of time just taking it day by day. Many days were just get up, work, come home and go straight to bed.

Over time though, things have improved. With better medications, the disease has been more stable with relapses less often than in those early years. I’ve found a way forward on a different path, and I do believe in many ways I am living a far more fulfilling life now than I had before as MS has forced me to take more time to reflect on things and make deliberate life choices that support me living a far more sustainable, happy and healthy life.

It was back in 2015 while in my job at a school rowing program that I was bitten by the cycling bug. I was lucky enough to be working with an Olympic rower from the national team and asked him if he could think of any way to help me to get back into exercising. When I explained to him what I had tried and what had hindered any progress, he suggested we set up a bike in our office with the AC on and a fan in my face and that we start small and build up slowly. We did and within a few months he thought I should look into starting paracycling and aiming for the Tokyo Paralympic games!

Being involved in paracycling has completely changed my post-diagnosis life. It has enabled me to tap into the athletic version of myself from before and has really been the silver lining of being diagnosed. There are many things that I can’t do physically anymore, and cycling is literally the only sport that I can now do. Every time I get onto the bike it allows me to prove to myself that regardless of anything else that is going on with me, I am still capable of doing this one thing really well. For me it allows me to show what I can do rather than focusing on those I cannot. 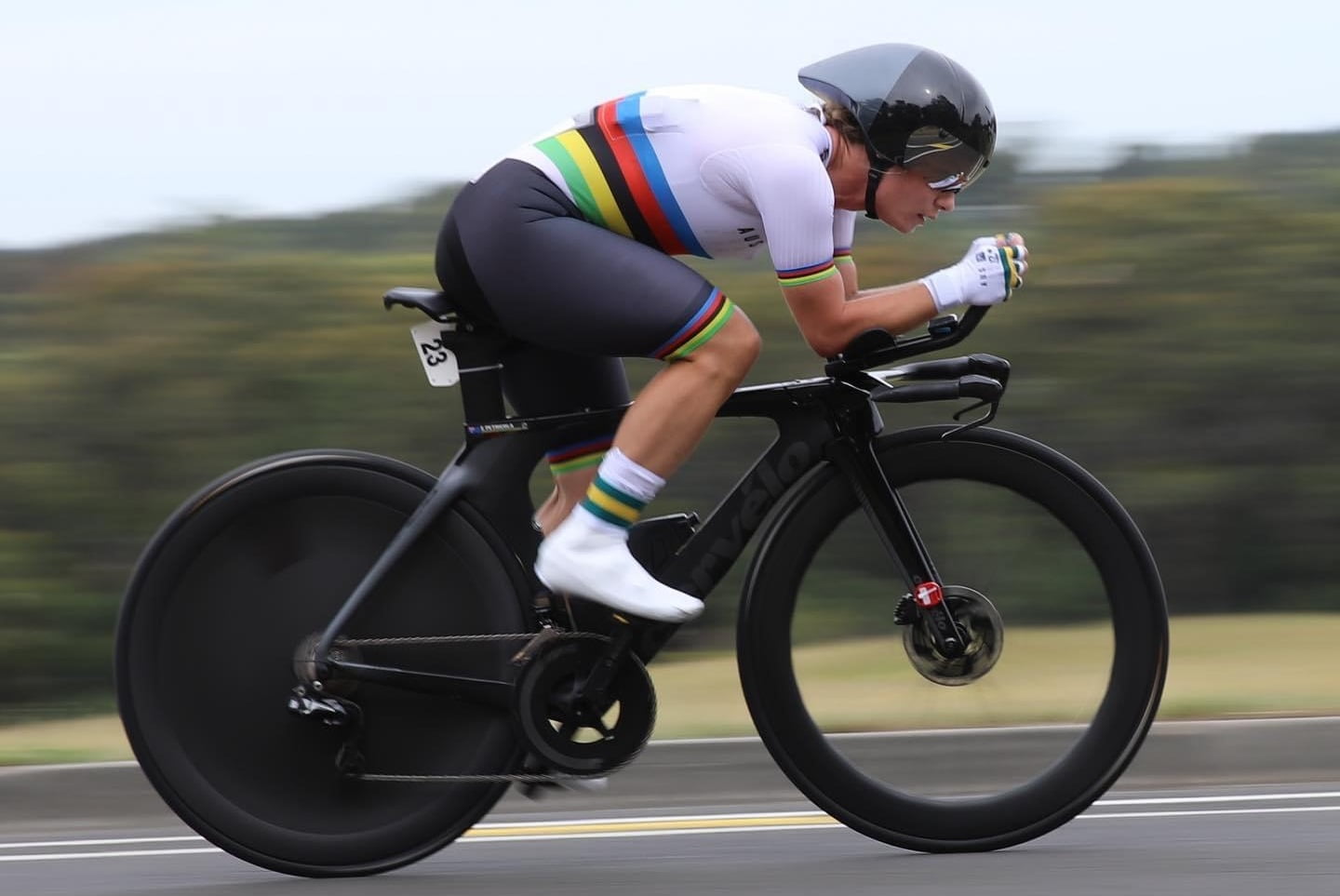 InfoCrank has played a huge part in my training – having a completely accurate power meter was probably the biggest catalyst for improving my training and enabling me to make necessary improvements to ultimately make the national team. When you have a tool that allows you to track your training so comprehensively and measure your performance consistently without other factors influencing the data, it means you can start planning a clearer path forward with your training. Prior to having a power meter I was only using heart rate to track effort, which can be impacted so significantly by fatigue, heat, illness and other factors making it hard to gauge how hard you are actually working. Power is power and you are either pushing it or you aren’t!

I’m lucky that my coach at the time, Shane Kelly, asked me to get an InfoCrank power meter as they were known to be the most accurate and reliable power meter. What I love about it is that you don’t have to constantly calibrate it – it is almost plug and play! It is also great to have the power balance across both pedal strokes as this can be an important tool for me when one side is more compromised than the other.

I now have a far greater understanding of the imbalances of power across my body since using the InfoCrank. One side is more significantly impacted by the disease than the other, and so knowing what my normal ratio is for each side and tracking it during times when things are a bit tougher than they are during a more ’normal’ period is important and can help make decisions around backing off training until things start to head back to a more familiar place. Thinking of getting an InfoCrank? Do not hesitate! It will be the best thing you can do in terms of improving your performance.

I think this past year of the pandemic has been challenging for so many athletes. In 2021, I hope the year ahead brings us greater health on a global scale, and personally I hope that the Paralympic games can go ahead and I can chase a couple of gold medals for my country!

← Accuracy in power meters – what is it? Storey Racing →